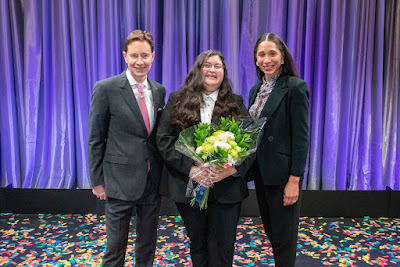 The Boys & Girls Clubs of the Peninsula's 2022 Youth of the Year is an award presented to those who have made an outstanding impact in their community. The selection process for this award is extremely competitive.Candidates must present a series of four speeches to multiple panelists on the interview team. Xitlali was one of 12 students who competed for the award after being nominated by her coaches from Future Grads, a college preparatory program held in the Boys & Girls Club.

Xitlali is in her senior year of high school. In addition, she serves as President of the Associated Students of Cañada College and is a part of the Middle College High School program. Outside of Cañada College, she has volunteered as a tutor in her local library with Project READ as well as other organizations such as the Pomeroy Recreation & Rehabilitation Center. She attributes her time spent in the community to helping her discover that her purpose is to support her community. She is extremely community focused,which has helped her to stand out as a nominee.

The Youth of the Year event, described by Xitlali, was fancy and glamorous. There were hairdressers, make-up artists and event planners to prepare the candidates for the event. Many well-known people attended including Andre Iguodala (professional basketball player for the Golden State Warriors), John Donahoe (CEO and President of Nike) and Eric Yuan (CEO of Zoom). The final four nominees presented their speeches to the panelists, each sharing their own community building stories. After this, each nominee had one-on-one interviews where they were asked questions about their experience in helping others at the Boys & Girls Club.

With this award, Xitlali will receive a $1,000 scholarship and special recognition for the work she has done for her community over the past four years. Xitlali describes her recognition as a win for her entire community and she is determined to show others that anyone can achieve this honor. She attributes much of her work ethic to her grandparents who constantly reminded her of her roots and why it’s important to work hard. Her grandparents were highlighted throughout her speech, and she talked about how they have reminded her of her culture. She takes so much pride in her indigenous roots, as her name translates to “Star Goddess.” She says that she wants to inspire others as her grandparents inspired her, along with her little brother who constantly gives her reassurance. She is also extremely grateful for the Cañada College community for their extra support through this competition.

After Cañada College, Xitlali plans to attend a four-year university and, so far, she has been accepted to University of San Francisco, Loyola Marymount University and California State University, East Bay. She plans to major in Political Science where she aspires to become a politician and help the entire nation but especially underrepresented communities.

Xitlali remarked that the best part of the Youth of the Year experience was meeting new people, networking with them and learning from them. She also would like to put these skills back into helping her community. Xitlali’s community will be cheering her on as she advances through the Youth of the Year National competition.