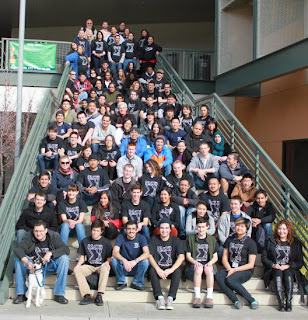 The highly successful Math Jam program at Cañada College will receive the Exemplary Program Award from the Academic Senate for California Community Colleges.

The award will be presented at the Jan. 14 Board of Governors meeting for California Community Colleges in Sacramento. Cañada will receive a $4,000 cash award.

Sponsored annually by the Foundation for California Community Colleges, the Board of Governors established the Exemplary Program Award in 1991 to recognize outstanding community college programs.

The Academic Senate selects annual themes related to the award’s traditions and statewide trends. Recognizing the importance of assessment in placement, the theme for 2013-14 is “Assessment for Placement: Effective Practices, Alternatives, and Improving Outcomes.”

Programs were judged based on their innovative strategies for implementing assessment, placing students, preparing students for placement exams, and scalability. Math Jam was designed as an intenstive math placement program.

Last January, the Math Jam program was honored with a J. Russell Kent Award from the San Mateo County School Boards Association. In October, it was named America’s top program at the Associate level at increasing Latino student success in college by Excelencia in Education, a Washington, D.C.-based non-profit organization whose mission is to accelerate Latino student success in higher education.

"It's an honor to be part of a program recognized by the State Academic Senate with the 2014 Exemplary Program Award,” said Cañada College Mathematics and Engineering Professor, Amelito Enriquez, who helped establish the program.

Enriquez led a team at the college that created the Math Jam program in 2009 to address the low level of math preparation of underrepresented students studying STEM – Science, Technology, Engineering, and Math. Initially it was designed as an intensive math placement preparation program but has since evolved into a campus-wide math success program, serving students in pre-algebra through advanced calculus.

“Math Jam has completely changed my view of my future,” said Joanna Peet, a biomedical engineering major. “When I came to Cañada, I wanted to get a personal training certificate and now, because of Math Jam and the love of math that it has given me, I want to become a biomedical engineer.”

The first Math Jam illustrated the power of the program. Nearly 94 percent of the students who took the math placement test a second time scored higher after completing the two-week program. More than 63 percent improved their scores enough to be placed into a higher math course. In 2010, the program had grown to 129 students with similar success rates.

Today, the college offers three, one-week, Math Jams offered in both the day and evening, serving more than 400 students.

“It has decreased the time from enrollment to transfer by allowing students the opportunity to retake the math placement test and, in 60 percent of cases, skip ahead to the next math level,” said Danni Redding Lapuz, project director for Math Jam. “It has increased retention and persistence rates for students and more students are achieving success in their math courses.”

Math Professor Denise Hum said the program has had a huge impact on how students perceive math at the college. “It definitely seems like it is cool to like math,” she said. “In terms of what it does for students in the classroom, it helps students who wouldn’t typically feel confident as math students, gain confidence and skills.”